Hi friends! Recently, I wrote a post about vintage buttons, taking a look at buttons made of bone, wood, jet, and shell. That was Collecting Vintage Buttons Part I, and today I’m finishing up with Part II, in which we’ll be considering buttons manufactured out of metal, Bakelite, porcelain, and plastic.

Later this week, I’ll be writing a post filled with button decorating ideas. I found some really great ways to use these little beauties in home decor, so be sure to check it out.

Metal buttons began to be manufactured in the 18th century, using a die cutting process on sheets of metal. Any embossed decoration would have been imprinted on the metal discs at the same time.

Most military uniform buttons are made of metal and older ones are highly collectible. The buttons you see here, embossed with an eagle holding an anchor, came from US Navy uniforms.

The button on the left replicates an Austrian coin; in the center is another naval button; and on the right is an unidentified example with two griffons(?).

Through the years, metal buttons have been manufactured featuring a variety of different ways to attach them to garments. On the far left is a “shank” button, (maybe because it’s shaped like a lamb shank?) with a loop of wire for attachment to fabric.

The bigger gray button on the top right has a stamped and pierced back called a “self shank.” And the one on the far right has a bar that one can sew through for attachment to a garment.

In reading an interesting article about buttons in the online magazine, Slate, I learned that poorer families in colonial America had to make their own buttons and were considered lucky to own their own button molds. Pewter or other metal would have been melted and poured into the mold to fashion buttons for the family.

The variety of button shapes and designs in metal is virtually endless, as you can well imagine. The ones you see above are just some of the buttons that have passed through my hands.

They are like miniature works of art. Over the years, I’ve come across numerous vintage pairs of earrings made out of beautiful buttons by some frugal soul.

Buttons up to and including the 19th century often made a  real fashion statement, depending upon their quality, design, and uniqueness. The clothing of aristocrats and royalty might hold hundreds of buttons, leading in part to the need for servants to dress them.

And requiring, as well, special tools to accomplish the task–button hooks–for gloves, boots & shoes, and other apparel. Above are a pair that I inherited from my grandmother when she passed away at 89. The top hook is made of wood, while the bottom one of celluloid (an early plastic). Get all the details about collecting button hooks here.

Isn’t this button a beauty? Porcelain and other ceramic buttons began to be manufactured from about 1830 and onward. They were widely produced, especially in France, where they were hand-painted or decorated with transfer prints (like Staffordshire china). Like other natural materials, porcelain is cool to the touch.

The lovely button above a would have been hand-painted by a woman, either in a large room filled with other ladies or possibly in her home. The paint would typically have been applied over the glaze and then fired for permanency.

The 22 karat gold painted on the edges is rather delicate; therefore, you should clean it gently. I’ve sold several hand-painted porcelain buttons in the $5-10 range, depending upon size, beauty, and condition. Large, ornate ones could sell in the $100s.

Invented in 1907 in New York state, Bakelite is one of the earliest forms of plastic, and it is highly collectible. In fact, collectors go crazy for it in all its forms: buttons, jewelry, toys, flatware, radios, napkin ring holders, and more. However, it can be very tricky to properly identify this unique and rare material. To the untrained eye, it can look like any old plastic.

Jamie Brock, in her Vintage Button Guide, provides a couple of different testing methods. I’m going to be honest with you and tell you that I’ve never done too well with any of these tests. Over the years, I’ve learned what Bakelite looks like, what it feels like, and how much it weighs (heavier than plastic). And most of the time, I’ve been right.

It also has a clunky sound when two pieces are knocked together. This sound, along with the look and feel, are reasons why billiard, dice, and chess makers still use Bakelite in their manufacturing processes. Bakelite buttons can soar in price up to the $100s.

The plastic buttons that we know today began to be produced in large numbers between the World Wars, in the 1930’s, in every color under the sun.

Plastic has proven to be the most economical “raw” material for button manufacture, and they now make up the vast majority of buttons being produced today, whether for clothing or crafts. I often frame attractive cards of buttons using corner holders, like you see in this photo (SOLD).

I think these vintage “King’s Regiment” buttons in bright blue have a nice, nautical feeling about them. In fact, King’s Regiment 71 has a long history as a British regiment that has served all over the world. There’s a school in North Carolina named after this Scottish regiment, and I’m guess that’s where these buttons came from–old school uniforms. They are in my shop priced at just $2.99. (SOLD)

Truth be told, sometimes I’m more attracted to the cards than I am the buttons! I’m always on the lookout for both loose buttons and old cards.

One day, not too long ago, I hit a garage sale with not just one, but four tins of buttons for a dollar each.

Yep, you heard me right 🙂 Many of the buttons in my collecting posts came from these tins. Oh what fun I had sorting through them all!

And on a different occassion, I came across a collection of button cards that had to come home with me. Aren’t they lovely?

Button Facts
Did you know that the Amish refuse to wear buttons considering them a source of pride?
Cute as a button, comes for the saying, “Cute as a Button Quail.”
This small bird is in fact very cute. Over time, the last word was dropped.
Button, button, who’s got the button? was a popular 19th century children’s game.
The button nose is the most popular nose among those getting “nose jobs.”
Interested in Part I of this Button series?
CLICK HERE

Thanks for stopping by–
If you enjoyed this post, subscribe today
and get a FREE copy of my eBook: 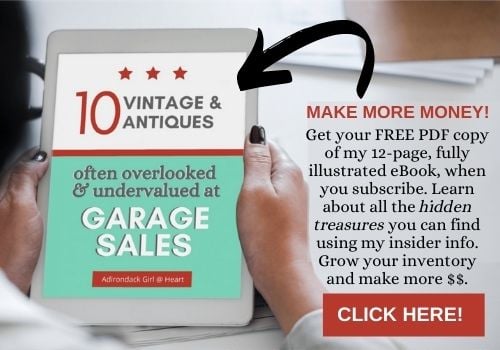